We aim at strongly contribute towards the development of cost-efective and efficient thermoelectric generators based on abundant and non-toxic materials. Thermoelectric materials convert heat into electricity and so they could be the power elements of small devices in the internet of things, for wearable applications, as well as for sensors. Moreover, they could also increase energy efficiency by recycling wasted heat in most human activities or directly from the sun. We target two temperature ranges: we propose organic and hybrid based thermoelectrics for low temparature applications, while for higher temperatures we are developing nanostructured silicon/germanium technologies.

In the case of organic thermoelectrics, our strategy consists of using the inherent good properties of polymers, such as their low thermal conductivity and easy solution processing, in combination with electrical fillers such as carbon nanotubes. Moreover we target efficiency enhancements by judious control of composition, doping, crystallinity, orientation, and porosity.

Inorganics, on the other hand, typically exhibit good electrical properties and thus our efforts are placed on reducing their thermal conductivity and increasing their Seebeck coefficient by means of nanostructuration. Here we use advanced fabrication technologies such as molecular beam epitaxy and laser litography to fabricate novel heat sensors. Potential synergetic effects in hybrid organic-inorganic systems are also been investigated. 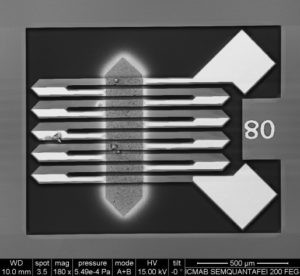 In order to gain deep insights into the thermoelectric systems, we combine spectroscopic techniques such as Raman, microPL or ellipsometry together with device characterization techniques, including macroscopic and local measurements of the electrical and thermal conductivities.

Finally, we also aim at using the developed scientific knowledge to help in upscaling some of the technologies. We have, for instance, recently patented a technology to produce both, p and n type organic semiconductors from a single ink, strongly facilitating the fabrication of thermoelectric generators