Paula Pamies is a Nanoscience and nanotechnology student who did her bachelor thesis in the Nanopto group under the supervision of Mariano Campoy. Paula got the highest mark defending the project entitled ‘Polymer donor-polymer acceptor bulk heterojunction solar cells’. Congratulations! 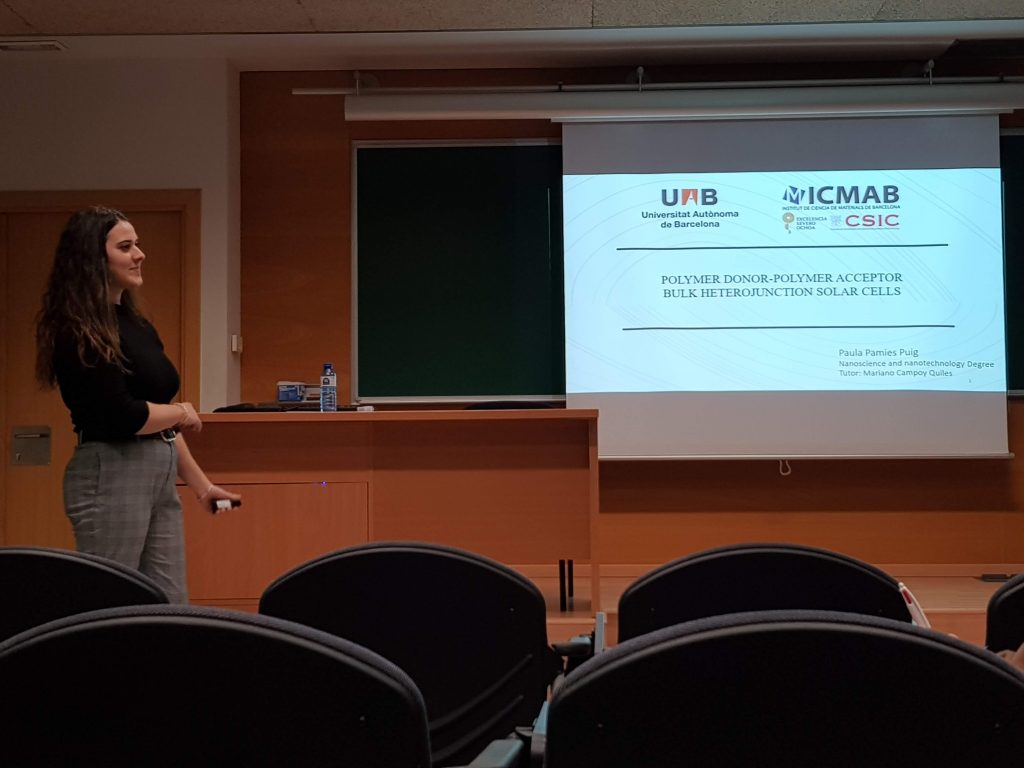 In this project, the combination of two polymers (one acting as a donor of electrons and the other one as an acceptor) as main components of the photoactive layer of an organic solar cell is used.
The power conversion efficiencies records of all-PSCs are achieved by spin-coating on rigid glass substrates, what is not compatible with massive production via R2R technology.

Inverted organic solar cells were fabricated, they consist in: an ITO coated glass which has the property of low sheet resistance and high transmittance, it acts as a cathode. Before doing any process, substrates must follow a cleaning process. Once it is done, an electron transport layer is deposited (ZnO) over the cathode. To deposit this layer, we use a Dr Blade (Blade coating). A solution is placed on a substrate bellow the blade. When a constant movement is established between the blade and the substrate, the aliquot spreads on the substrate forming a thin film after drying. To make the Active layer solution, the desired materials need to be mixed with a solvent. Active layer is also deposited by Blade coating but inside the glovebox. The next step is the thermal evaporation of metals. Particularly MoO3 (10 nm), which acts as a hole transporting layer, and Ag (100 nm), which acts as an anode.

For all the combinations of polymer donor-polymer acceptor, five different polymers were used, it was observed that lower PAL deposition temperature originated better device performance, so the more time it takes for the film to get dry, fewer phase separation appeared. Fact that makes chloroform the best solvent among all those tested. Its low boiling point, make necessary low PAL deposition temperature.