José P. Jurado and co. workers have recently published a paper in Advanced Energy Materials on organic thermoelectrics. This work, carried out by Mariano Campoy-Quiles and in collaboration with other groups of ICMAB, discusses on the the potential uses of organic thermoelectrics as  solar harvester materials. 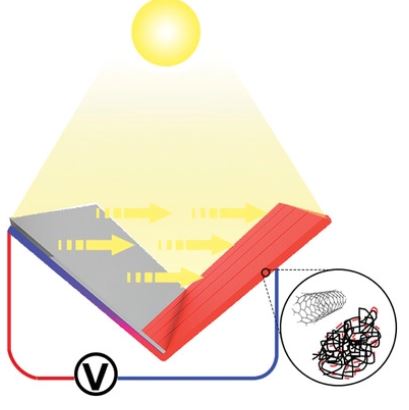 Table of content of the publication: Sketch of the solar concentrator using organic thermoelectrics based on films of polymer and carbon nanotubes.

Thermoelectrics have emerged as a strategy for solar‐to‐electricity conversion, as they can complement photovoltaic devices as IR harvesters or operate as stand‐alone systems often under strong light and heat concentration. Inspired by the recent success of inorganic‐based solar thermoelectric generators (STEGs), in this manuscript, the potential of benchmark organic thermoelectric materials for solar harvesting is evaluated. It is shown that the inherent properties of organic semiconductors allow the possibility of fabricating organic STEGs (SOTEGs) of extraordinary simplicity. The broadband light absorption exhibited by most organic thermoelectrics combined with their low thermal conductivities results in a significant temperature rise upon illumination as seen by IR thermography. Under 2 sun illumination, a temperature difference of 50 K establishes between the illuminated and the non‐illuminated sides of a poly(3,4‐ethylenedioxythiophene) polystyrene sulfonate (PEDOT:PSS) film, and ≈40 K for a carbon nanotube/cellulose composite. Moreover, when using light as a heat source, the Seebeck coefficient remains unaffected, while a small photoconductivity effect is observed in PEDOT:PSS and carbon nanotubes. Then, the effect of several geometrical factors on the power output of a solar organic thermoelectric generator is investigated, enabling us to propose simple SOTEG geometries that capitalize on the planar geometry typical of solution‐processable materials. Finally, a proof‐of‐concept SOTEG is demonstrated, generating 180 nW under 2 suns.